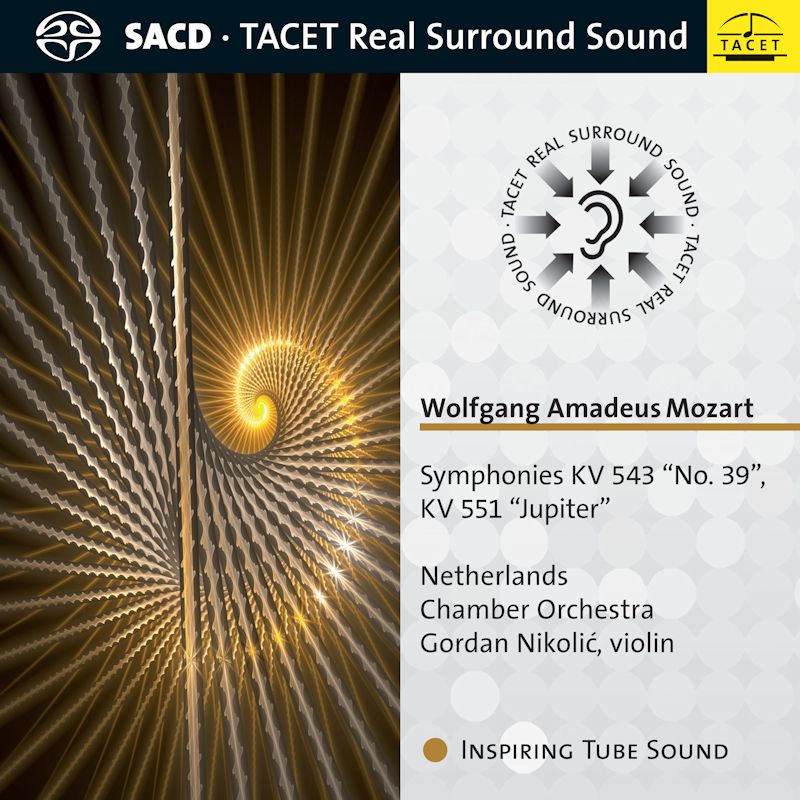 Yoopy! - there is a new recording of Mozart opus 551 - oops, KV 551 - and KV 543! - Some reviewers shake their heads. "Yet another one!". - Well ("Hey, guys" Gordan Nikolić always says), I'm sorry, that's the way it is with TACET, again and again known works. You have to get through there. Fortunately, these two are so devilishly good that centuries after their creation they still knock people who have an antenna for it off their feet. Wait a minute, antennas, did they already exist back then? Anyway, you know what I mean. Silly? Yeah, silly. Who would say that Mozart wasn't occasionally silly? Here too? And bold, cheeky! The way he quasi throws down the last movement of the Jupiter symphony like a gauntlet at the feet of his contemporaries is inimitable. Unfortunately, you can't see it on this SACD when the bassoons and cellos laugh up their sleeves, but you can hear it all the better. What contrasts! After the bright beginning with timpani and trumpets, the second movement comes from a completely different world. "Con sordino", seductively and gently Gordan Nikolic and the girls and guys of the Netherlands Chamber Orchestra caress the ears. And so it goes on and on. Same with the E flat major symphony. Yes, but aren't there already many wonderful recordings of these works? Yes there are. But as is the case with Mozart, the most famous interpreters can fail and the least known can hit the mark. Decide yourself. Also with sound there is always headroom upwards just as on the Richter scale, upwardly open. Speaking of sound, during the recording the orchestra sat in a circle around Mozart, similar to the other symphonies in this series. Native TACET Real Surround Sound. Sit down with him, right in the middle!

Once again, Tacet undertakes its commendable mission to place the listener firmly in the centre of a sympathetic and pointed performances, this time of two of Mozart’s most popular symphonies. more...

Now let’s get Jupiter down from his Olympus, Gordan Nikolic must have said to himself as he conducted Mozart’s 41st Symphony into the Tacet microphones set up around him. more...