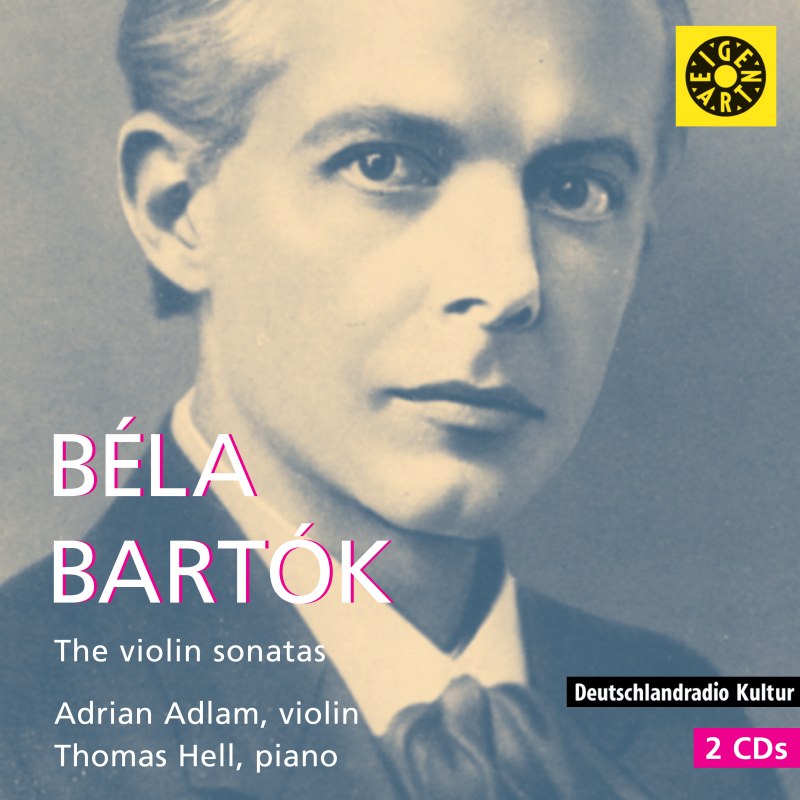 In Bartók's music, the rhythmic element plays a greater role than with other composers. It does not tolerate rhythmically imprecise, only half-exact renditions, which unfortunately do not occur infrequently. Adrian Adlam and Thomas Hell play very rhythmically precise and, moreover, take Bartók's tempo indications rather strictly as well. They play through a kaleidoscope of clear, transparent and yet unfamiliar, uncompromising sounds that grab the listener and pull him/her forward. Dissonances as far as the ear can hear, far more than a random generator, simply stringing together arbitrary intervals, would produce. Thus the listener can perhaps get an idea of what went on in the listeners' minds in the following scene.
Concerning a performance of the First Sonata with the violinist Jelly d'Arányi and himself at the piano, at which Ravel, Szymanowski, Stravinsky, Milhaud, Poulenc, Honegger and Roussel were among those present, Bela Bartók wrote to his wife: "...Ravel sat to the right from me and turned the pages; Milhaud glanced at the score from my left. There was a great deal of enthusiasm, not only for my Sonata but also for Jelly's playing,... They liked Jelly so much that they almost devoured her. Jelly also said that this illustrious society - more than half of the world's most famous composers - inspired her so much that we played more beautifully than ever before. Of the Sonata, they declared that "c'est une merveille", and that it is the most beautiful violin sonata in God knows how many years (of course the French are a bit generous with their praise). Ravel and Poulenc like the second and third movements best, Milhaud the first, Stravinsky the third. ..."

(...) Both musicians deserve congratulations for putting together this difficult, but formidable collection.
Zan Furtwangler. en savoir +...