I have been listening to Beethoven′s symphonies for the better part of sixty years and it never ceases to surprise me how much one can do with that music. In the pyramid of compositions played both in the concert hall and/or in radio Beethoven has no equal, it′s always been on the top. Sometimes there is a challenge by Mozart and Brahms but nobody can dispute that the most recognized of all beginnings in classical music is that of the 5th symphony. Fortunately there is nothing callow with Rajski′s version and his previous recordings of Beethoven symphonies for Tacet have shown a clear logic behind these realizations. Artistically he takes the fast road with Beethoven in the Viennese style rather than the heavy ponderous Germanic style so prevalent with one of Berlin′s top orchestras and many other orchestras in the land.

Right from the beginning of this disc we are confronted with the unusual placement or seating of this orchestra in reference to us, the audience in our listening rooms. Tacet′s hi-res “Real Surround Sound” SACD concept seats the orchestra in such a way that specific instruments and/or sections of the orchestra appear in our speakers defying the standard upfront configuration, as shown in the following diagrams: 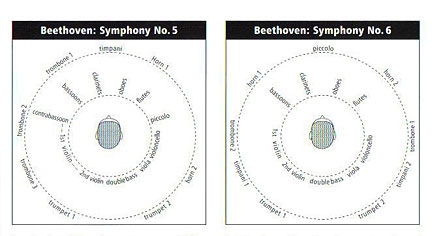 Tacet makes a convincing argument for their decision to place instruments in different positions for both the 5th and the 6th symphonies. In the case of the 5th the orchestra seating is based on Beethoven′s introduction for the first in one of his orchestral pieces of three trombones, one piccolo and one contrabassoon, and the obvious solution is to enhance Beethoven′s historical decision. This is accomplished by placing these specific instruments in a location (read LF speaker) which is rather empty until that void is filled by the three trombones and the contrabassoon in the overpowering Finale, and no recording I have ever heard equals the acoustic effects this seating arrangement delivers. In Symphony No. 6 the orchestral seating and what comes out of what speakers changes radically - all to highlight certain instruments. The piccolo and two horns upfront, one in the left and the other in the right, as well as the placement of two timpani, two trombones and two trumpets equally divided on the left and right (read LR and RR speakers) certainly enhancing the surround acoustic space.

Realistically speaking Tacet′s decision is perhaps less controversial than it sounds. Going back to the two-dimensional image of music, the “horizontal” element being the duration of sound, and how Beethoven might have thought about the creation of his music as harmonic anticipation, repetition and change in tempo, it makes sense to place the core of the “harmonic” orchestra back center and evenly spread in both symphonies. On the other hand the “vertical” element has more to do with the actual sound of the instruments, specially the solo or quasi-solo instruments, and those are placed in the other edges in the back and upfront where that “vertical” color and timbre can be not only noticed but enhanced. All in all, to make it short, Tacet′s way with the orchestra is a resounding (no pun intended) success and if one has the adequate equipment (read five full range speakers for surround) there is no better way to listen to a symphonic piece. Maybe the specific location of the instruments can be argued but not the concept, and we wish more of this type of real surround recordings were made.

Artistically speaking the performance of these two symphonies is absolutely beyond reproach. The 5th “damn the fermatas - full speed ahead” attitude permeates the whole symphony to a felicitous and overpowering Finale. This 6th allows us to imagine whatever we wish from Beethoven′s semi-programmatic idea of a day in contact with nature and I for one find this symphony just as fresh and essentially new every time I hear it in concert or in a recording. This symphony goes to people′s basic senses and in my experience is still a source of wonder.

This is definitely a reference hi-res disc both because of the orchestral performance and the sound. If anybody still out there dares to say that regular CDs are just as good as a hi-res surround sound SACD all they have to do is listen to this disc with the appropriate equipment. Specifically they should go to the Finale of the 5th (T-4) and T-8, the Storm movement of the 6th - there are no words to accurately describe the feeling of being in the midst of orchestra as it were. A highly recommended disc, both for the sublime orchestral performance and more so for the glorious sound – a must have!